What is a Belief?

A belief is an explanation for why things seem to happen that we accept as true.

Just because we believe something to be true, doesn’t it make it so. One definition of knowledge is when truth and belief overlap: 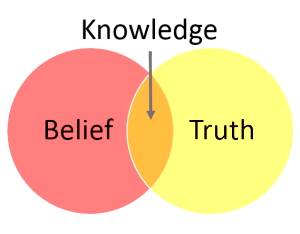 A belief is different from a judgement, which involves consciously evaluating a proposition for its truth. If the conclusion is that it is true, judgement may lead to forming a belief. The belief acts as a representation of how part of the world works and therefore influence the actions we take in this world. If you believe something is true, you must be willing to act accordingly- otherwise you can’t claim belief [1]. Beliefs drive all our behavior, including how we react to the behavior of others (driven by their own beliefs).

Types of beliefs include [2]:

Another way to classify beliefs is by where they apply (to ourselves or the world) and how they are adopted: 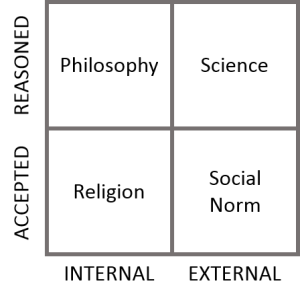 Religion and Philosophy are belief systems that guide how we should behave- they are more internally focused. Religious beliefs are associated with faith while reason plays are stronger role in philosophical belief.

We tend to accept the beliefs of the society in which we live, often without much thought since we are exposed to such beliefs long before we have developed a capacity to reason.

The profound influence of science is due to its systematic search for knowledge (truth intersecting with belief). Science minimizes faith while religion seeks to maximize faith. But science still rests on some assumptions taken on faith [3]: external object reality exists and has a structure that permits making generalizations and predictions. It’s key strength is the ability to revise beliefs based on new evidence. While the scientific method can never absolutely prove a belief is true, it is excellent at disproving false beliefs using the tools of hypothesis formation and testing. These are learned tools that don’t get exercised in our early formations of beliefs in life (and sometime rarely in adulthood too).

Why do we have Beliefs?

We are incredible pattern recognition machines, observing and making conclusions about how the world works from birth. This ability to model the world is critical for our survival and has lead to our increasing ability to hold beliefs.

How do we form Beliefs?

We form beliefs from our own experience and accepting what other tell us [4]. Combining our experience and intentional experiments we may try, we can generalize (often using internal reflection) this information to form beliefs. We also listen to trusted authority figures and experts to leverage their experience and often adopt beliefs that they hold. Despite our self-image as a rational species, emotions play a large role in how we form beliefs [5]. We tend to become attached to some beliefs and reject others based on emotions, leading to biased reasoning:

Like in software, you can envision a ‘stack’ that we use to process our perceptions of the world that starts at a physical level and proceeds up to an intellectual level. The interface between emotional and intellectual levels is beliefs: 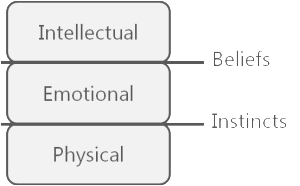